U.S. DEPARTMENT OF DEFENSE: The Department of Defense and the U.S. Department of Veterans Affairs Partner With the American Foundation for Suicide Prevention to Focus on Reducing Suicide 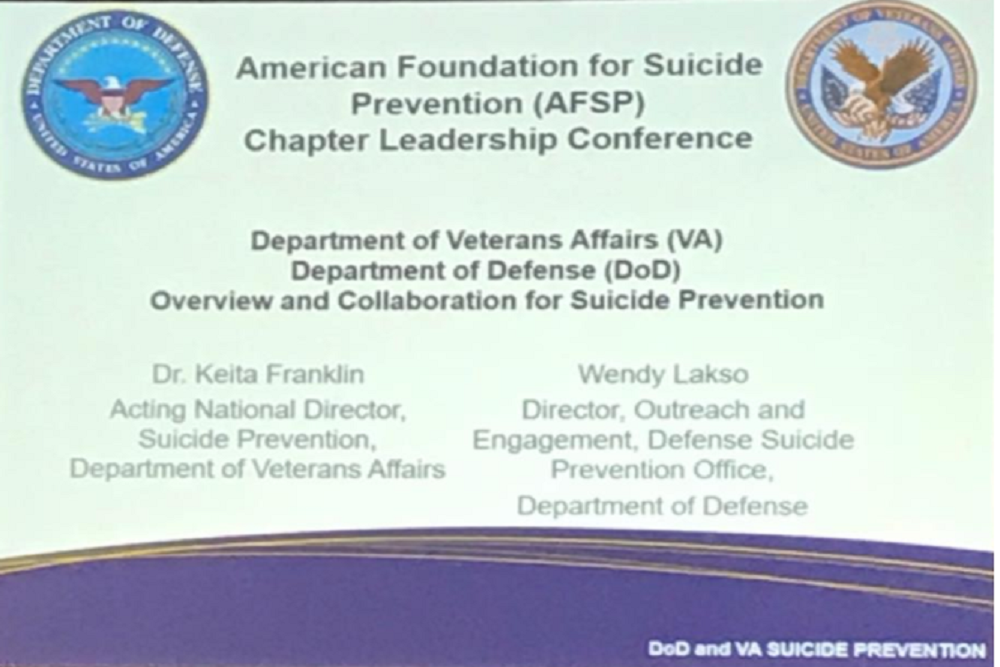 U.S. Department of Defense issued the following announcement on Feb. 5.

On Jan. 30, at its annual Chapter Leadership Conference, the American Foundation for Suicide Prevention announced a milestone partnership with the U.S. Department of Defense and the U.S. Department of Veterans Affairs. The three organizations have been champions for service member and veteran suicide prevention for many years, but this announcement marks the first time they are joining together to reduce service member and veteran suicide.

“As the nation’s largest suicide prevention organization, the American Foundation for Suicide Prevention is proud to announce two new partners in the fight to prevent suicide – DOD and VA,” said Bob Gebbia, AFSP CEO. “We know from research that suicide is a national public health issue that impacts all Americans, including our service members and Veterans. By having the DOD and the VA involved, we can make it a top priority to reach the men and women who serve, and have served, our country.”

“VA and DOD have endorsed AFSP’s goal of reducing the national suicide rate 20 percent by the year 2025 and will not stop in our efforts to work towards eliminating suicide among our service members and veterans,” said Dr. Keita Franklin, acting national director of suicide prevention, Department of Veterans Affairs. “Suicide is a national public health issue that impacts people of all ages, and prevention requires the cooperation and commitment of communities across the nation. Reducing veteran suicide is VA’s highest clinical priority, and this partnership is a momentous step in advancing our work.”

Formalizing this partnership allows AFSP, DOD and VA to mobilize their respective nationwide networks of staff and volunteers towards a shared goal of reducing service member and veteran suicide. This partnership is a powerful example of the public health approach to suicide prevention in action, allowing all three organizations to reach service members and veterans where they are. The partnership will also enhance the ability of AFSP, DOD and VA to share evidence-based best practices and strategies to prevent suicide, helping advance the entire field of suicide prevention.

“Ensuring consistency throughout our communities — that our service members and veterans have access to resources before, while, and after wearing the uniform, and that the transition is seamless — is vital to our collective goal of reducing suicide,” said George Parisi, acting director, Defense Suicide Prevention Office, Department of Defense. “Partnering with AFSP and VA is key to ensuring service members, veterans, and their families receive the support they need.”

“Suicide impacts people of all walks of life, regardless of whether or not they’ve served in the military.” said Franklin. “There is no wrong door to treatment, whether that’s with VA or another provider. Our responsibility is to equip communities to help service members and veterans get the right care for them, whenever and wherever they need it.”

If you, or someone you know, is in crisis, support is available 24/7. The National Suicide Prevention Lifeline is available to anyone by calling 1-800-273-8255. Service members, veterans, and their loved ones can call the Military and Veterans Crisis Line at 1-800-273-8255 and Press 1, chat at VeteransCrisisLine.net, or text to 838255.