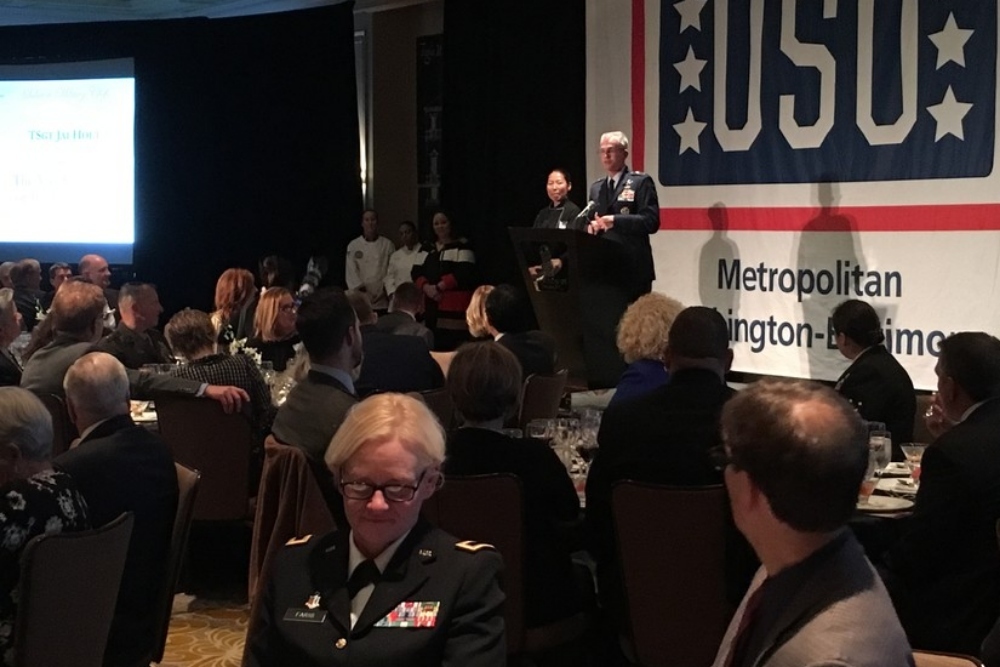 Air Force Gen. Paul Selva, vice chairman of the Joint Chiefs of Staff, talks about the importance of enlisted aides during the USO Metro’s 21st Annual Salute to Military Chefs and Enlisted Aides in Arlington, Va.

U.S. Department of Defense issued the following announcement on Nov. 16.

Most folks, including many in uniform, haven’t heard of enlisted aides, or EAs, much less what their contributions to national security are.

But leaders from around the Defense Department put a spotlight on them at the USO of Metropolitan Washington-Baltimore 21st Annual Salute to Military Chefs and Enlisted Aides here.

Even TV celebrity chef Robert Irvine was there, heaping healthy portions of praise on the EAs.

So what is so special and important about EAs?

First and foremost, EAs are trained culinary specialists. They don’t have to have that military occupational specialty to begin with, but they receive the training upon selection to the enlisted aide program and it becomes their secondary specialty.

That training is important because the flag officer they’re assigned to often hosts social events with meals, often involving U.S. or world military or civilian leaders.

Preparing the right food in the proper manner is so important to establishing these types of relationships, as bonds of friendships and trust are often formed over meals, said Air Force Gen. Paul Selva, the vice chairman of the Joint Chiefs of Staff.

Selva’s own EA, Air Force Master Sgt. Jennifer Medeiros, was first qualified as a dental hygienist. She has deployed multiple times, including to Afghanistan.

During one of her deployments, she interviewed for the EA position via Skype, by Selva’s family back in Hawaii. Flag officers interview their prospective EAs to ensure the fit is good for both.

While the interview was in progress, one of the Selva family puppies jumped into his lap. Selva said Medeiros exclaimed, “Oh, how nice, you have a dog!” That sealed the deal, he said, adding, “We knew she’d be a good fit, and she was.”

Medeiros, who teaches an adaptive cooking class during her off time, was named Enlisted Aide of the Year at last night’s event, which involved a competition between the top EAs of each of the services.

Navy Adm. Bill Moran, vice chief of naval operations, said it’s not just the cooking that’s important. It’s “the food, combined with spirit, enthusiasm and passion.” His EA, Navy Chief Petty Officer Jamie Wyckoff, has all of that, he added.

While food preparation plays a big part of an EA's duties, that's not all there is.

Throughout the day, EAs – who keep a low profile while performing their duties – walk around in and out of the flag officer’s house to see if something might be amiss, such as a broken window or suspicious activity. Or, there might be a problem with the plumbing. They have to know what to do or who to contact, said former EA, Army Staff Sgt. Marc Susa.

Another very important duty, he said, is ensuring the flag officer’s uniform is squared away and all the awards and decorations are where they're supposed to be. "Their appearance is a reflection on us," Susa said.