U.S. DEPARTMENT OF HOMELAND SECURITY: DHS Partners with City of Houston and Others to Combat Human Trafficking 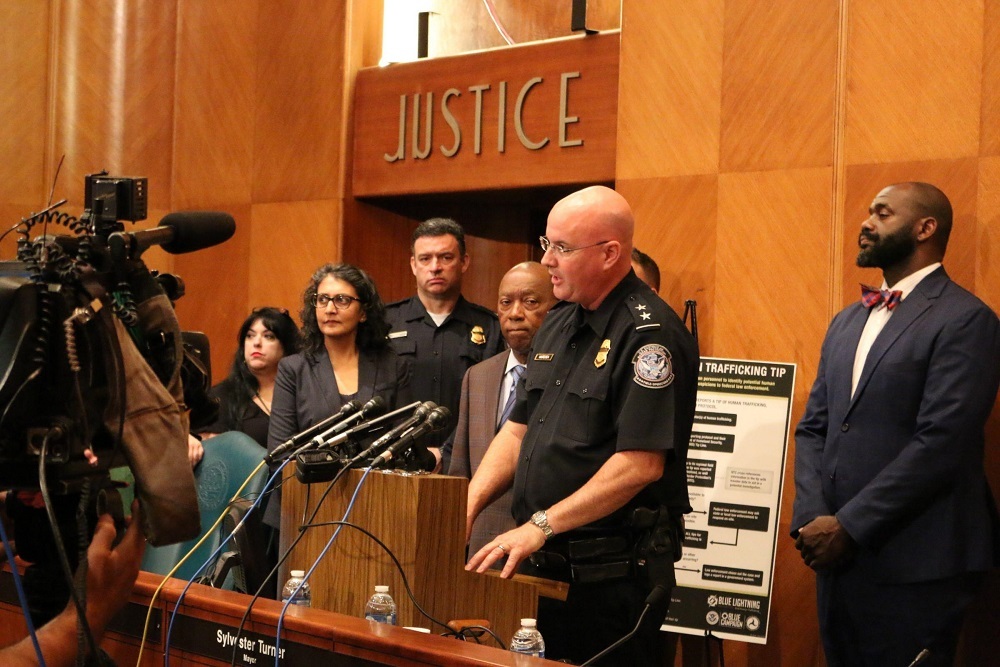 BLI is an element of the DHS Blue Campaign led by the U.S. Department of Transportation (DOT) and U.S. Customs and Border Protection (CBP), a DHS agency. BLI trains personnel to combat human trafficking within the commercial aviation industry.

HAS is the first airport system in the country to become a formal BLI partner.

“DHS is proud to announce a BLI partnership with the Houston Airport System,” said Kaitlin Seale, Program Manager DHS Blue Campaign. “Airport employees will play a vital role in combating human trafficking in Houston through identifying possible victims and reporting these suspicions to law enforcement. We look forward to continuing this important relationship and further efforts to combat human trafficking in our Country.”

“The DOT is empowering transportation organizations, employees and the traveling public with the knowledge to recognize and report suspected instances of human trafficking,” said David Short, Deputy Assistant Secretary for Aviation and International Affairs. “This BLI partnership is an impressive step forward, one that highlights the dedication of this community in taking a stand to end human trafficking. It will make a difference in many lives.”

“The City of Houston and the Houston Airport System fully support the anti-human trafficking goals of the BLI,” said Mayor Turner. “This agreement affirms and recognizes our goal to completely eradicate all forms of human trafficking. We will do everything in our power to work with the federal government in ending these heinous crimes.”

“The Houston Airport System remains committed to helping our federal partners in their efforts to combat human trafficking,” said Director Diaz. “The practice of human trafficking is a scourge to humanity, and it must end.”

Prior to Super Bowl LI in Houston in February 2017, HAS promoted awareness and education among volunteers and staff on how to identify possible human trafficking victims.

“Since then, we have taken a highly visible and proactive stance to show that human trafficking is not acceptable at Houston’s airports,” said Director Diaz.

All modes of transportation can be unwitting conduits for human trafficking; thus, with proper awareness and training, employees in the transportation industry can be key assets in identifying and reporting suspicious behavior. The new partnership with HAS, one of the largest airport systems in the world, will further discourage human trafficking activity and all HAS employees will be trained to detect the signs of labor and sex trafficking.

When such suspicions are triggered, employees have been instructed to follow the BLI reporting protocol and expeditiously report tips to the DHS Tip Line number at (866) 347-2423.

The U.S. Department of Homeland Security and the U.S Department of Transportation are federal agencies of the U.S. Government and are separate and distinct entities from the Houston Airport System.