DOD: Esper Makes Case That China is a Growing Threat to Europe 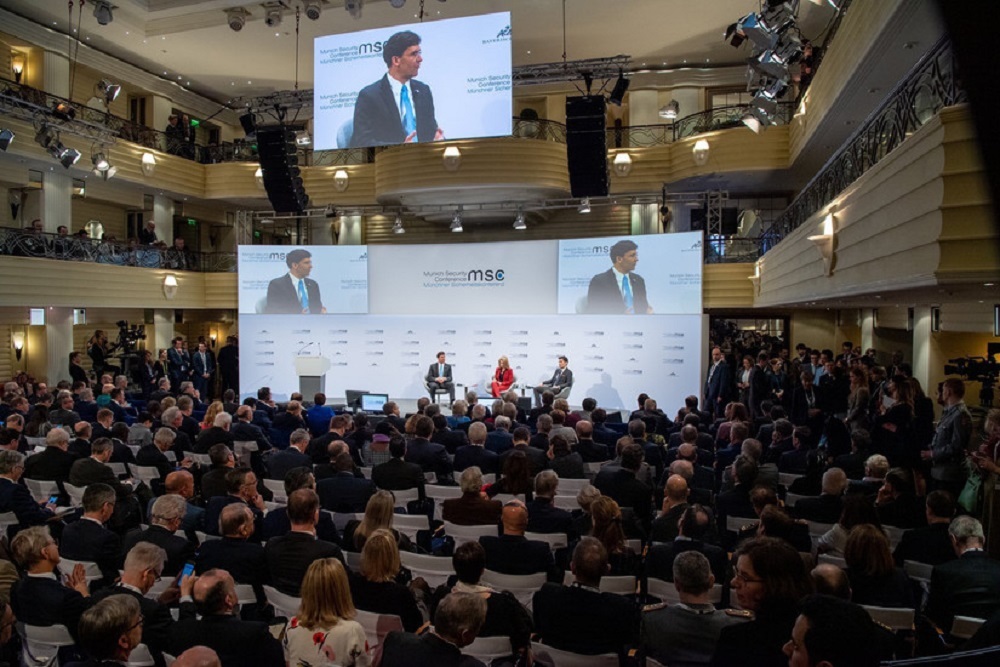 U.S. Department of Defense issued the following announcement on Feb. 15.

"America's concerns about Beijing's commercial and military expansion should be [Europe's] concerns as well," Esper said, during his remarks at the Munich Security Conference in Germany today.

The Communist Party and its associated organizations, including the People's Liberation Army, are increasingly operating in theaters outside its borders, including Europe, and seeking advantage by any means, and at any cost, he said.

China is currently applying economic and political pressure publicly and privately on many Indo-Pacific region and European nations,  to seek new strategic relationships, he said.

The Belt and Road Initiative is one such example where it uses overseas investments to force other nations into making suboptimal security decisions, the secretary noted. This has wide-ranging implications for the U.S. and allies in areas such as data security and military interoperability.

Another example is China's telecommunication firm Huawei, which has developed and is exporting 5G networks  "that could render our partners' critical systems vulnerable to disruption, manipulation and espionage," Esper said.

"To counter this, we are encouraging allied and U.S. tech companies to develop alternative 5G solutions, and we are working alongside them to test these technologies at our military bases as we speak," the secretary said.

"In the long run, developing our own secure 5G networks will far outweigh any perceived gains from partnering with heavily subsidized Chinese providers that ultimately answer to party leadership" he continued.

The international community needs to be aware of the challenges presented by China's manipulation of the longstanding international rules-based order that has benefited the world for many decades, he said.

Beijing said that by 2035, it intends to complete its military modernization and by 2049, it intends to dominate Asia as the preeminent global military power, Esper said.

Over time, the Chinese have seized and militarized islands in the South China Sea, rapidly modernized its armed forces, while seeking to use emerging technology to alter world power in its favor, he said.

"The world is too interconnected for us not to work together to solve some of our toughest problems." - Defense Secretary Dr. Mark T. Esper

Party leadership continues its rampant technology theft, while resolving to eventually end its reliance on foreign innovation altogether, then independently develop its own systems, in an effort to dominate critical sectors and markets, he said.

Beijing is using artificial intelligence and other technologies to surveil and to repress many of its own people. Also, China is exporting those technologies to other authoritarian regimes, the secretary said.

For its part, DOD is investing in cutting edge technology to modernize its force and building stronger relationships with allies and partners. Examples, he said, are hypersonics, autonomous systems and artificial intelligence. The goal of developing these weapons is to protect the sovereignty of all freedom-loving countries.

While China is weaponizing the space domain through the development of directed-energy weapons and killer satellites, the Pentagon is standing up its first new military service in over 70 years — the U.S. Space Force — to ensure freedom of use, commerce and navigation in, to, and through space, for all, Esper said.

Next year marks the 20th anniversary of China's admission into the World Trade Organization, "a decision that fundamentally altered the course of international affairs," he said.

The thinking at the time was that China's admission into the WTO and other multilateral institutions would result in China's continued path to economic reform and eventually become a responsible global and political stakeholder, and possibly an eventual democracy, he mentioned.

Skeptics, however, warned that China would reap the benefits of free trade to acquire technologies to build a strong military and security state capable of expanding the reach of its authoritarian rule, he said.

"These are both credible arguments but we all know which one is winning right now," he said.

Having said that, the U.S. doesn't seek conflict with China, he said. "In fact, we look for areas of cooperation where our interests converge."

For example, Esper said the U.S. delivered 18 tons of medical supplies to China and provided other assistance to help fight COVID19, the coronavirus. "The world is too interconnected for us not to work together to solve some of our toughest problems."

The world is increasingly becoming aware of China's motives and is responding in turn, he said.

To be a responsible partner in the international community, China must be transparent and respect the sovereignty, freedom and rights of all nations, he said.