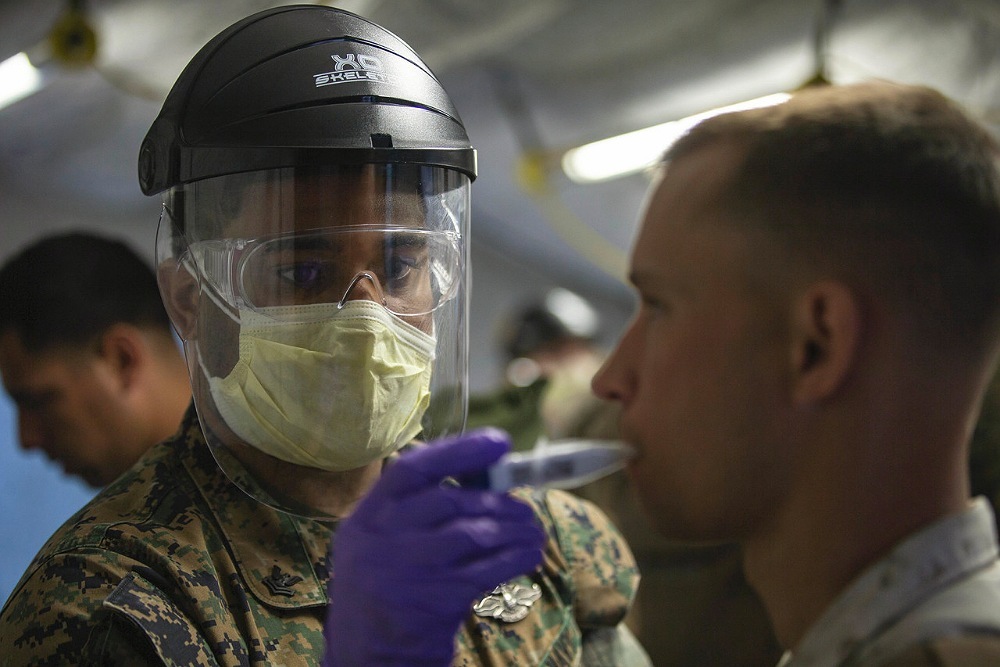 U.S. Department of Defense issued the following announcement on April 22.

The new system means the department is moving from a diagnostic focus to a diagnostic-plus-screening focus, the general said, noting that DOD now has the means to expand testing to a wider military population. The tiered focus gives priority to the highest-risk forces and will ensure strategic mission assurance, he added.

Tier 1 is testing for those involved in critical national capabilities such as strategic deterrence or nuclear deterrence, Hyten said. Tier 2 will test fielded forces around the world. Tier 3 encompasses forces being forward deployed or those redeploying, and Tier 4 is for all other forces.

Testing will become more frequent as supplies become more available. The military has already started testing those service members in Tier 1, the general said, but he pointed out that testing is not a solution. Service members still must engage in social distancing, wearing masks, washing hands and all other recommendations of medical officials.

The testing is, however, a powerful tool. When used in conjunction with all other preventive measures, it can "improve our overall force availability," Hyten said.

Norquist and Hyten both said the department is adjusting to the new rhythm COVID-19 has enforced on the world. Military and civilian employees continue their missions under the new strictures, including a huge increase in telework. "We now have an estimated 970,000 active duty and civilian personnel teleworking with great success," Norquist said.

For example, the deputy secretary said, the Defense Finance and Accounting Service has 95 percent of its workforce teleworking. "Each month DFAS makes over 5.8 million payments to civilians, active duty, reserve, National Guard and DOD retirees, but because they previously prepared for it and practice extensive telework, they're sustaining regular operations at full capacity," he added.

But some jobs in the military can't be phoned in, and that includes training new recruits, working aboard ships and in cockpits and otherwise working in constrained spaces. The department is working to address those situations, Norquist said.

The department will screen individuals with questionnaires and thermometers to identify people at risk. They will be put in quarantine for 14 to 21 days, depending on the risk tolerance, to identify those who are infected, but are not yet showing it, he said.

"Prior to leaving quarantine, we will conduct a swab test and a temperature check to identify individuals who are infected, but still do not show it. … As the unit then moves to its mission, [we] will keep the group together, but [with] limited outside interaction to prevent introduction of infection from outside."

Again, masks, social distancing, cleaning workspaces and more will continue as the process continues, the deputy secretary emphasized. "These interim measures enable us to reduce the risk," he said. "So we continue to operate until we develop therapeutics and vaccines. And as we learn more about the virus, we will continue to evolve our approach."