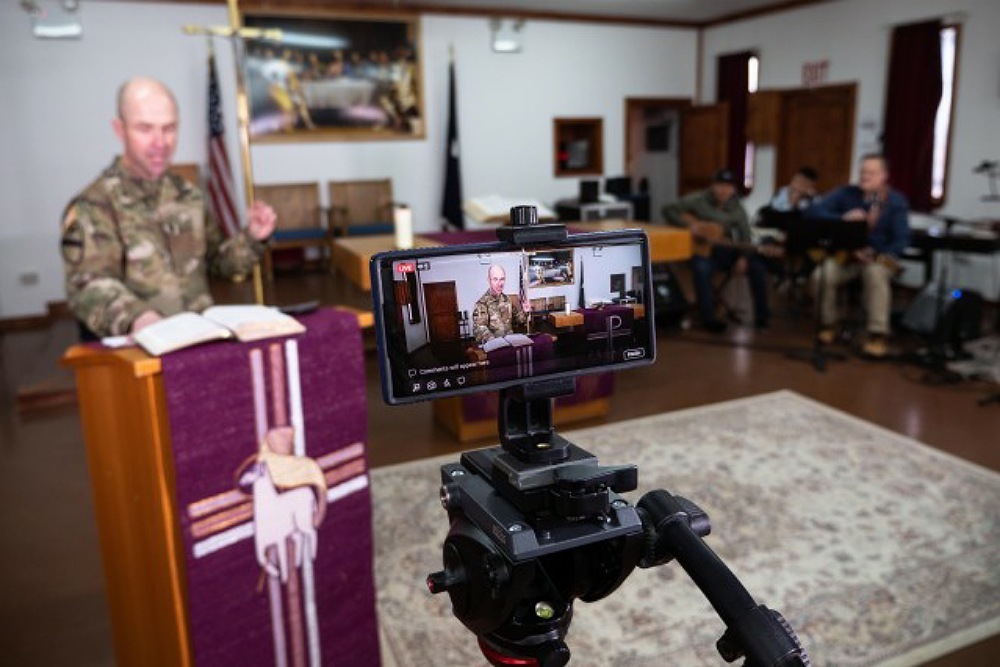 U.S. Army issued the following announcement on May 6.

With chapels closed and a ban on large gatherings, the U.S. Army Chaplain Corps has responded in creative and proactive ways to still engage with followers, its chief said Tuesday.

Facing physical distance challenges, chaplains and religious affairs Soldiers have turned to social media platforms and online video conferencing sites, allowing many of them to reach more people than before the coronavirus hit.

“Our people are watching you as you bring ministry and care to them in large numbers,” Maj. Gen. Thomas Solhjem, the chief of chaplains, said during a virtual Chaplain Corps town hall from the Pentagon.

On top of livestreamed worship services, chaplains have organized virtual potlucks and games among community members, with at least one chapel creating a “Bible Madness” bracket after college basketball canceled its March Madness tournament.

“We are in a unique time,” said Sgt. Maj. Ralph Martinez, the corps’ senior enlisted leader. “And as we deal with the challenges of this COVID-19 pandemic, I have witnessed unit ministry teams all across the world leveraging creative and innovative approaches.”

Through virtual settings, the diversity of faith found across the Army was also recently on show.

Last month, Army chaplains virtually celebrated the Buddha’s birthday, the Jewish Passover, and multiple events during Christian Holy Week, all in the same week. And currently, they are supporting the Muslim holiday of Ramadan, Solhjem said.

“Where else but in the Chaplain Corps can we celebrate such unique diversity as seen in that same virtual lens, in a way that probably we would not have seen in isolation of one another,” he said.

After weeks of isolation and physical distancing measures, the general said it’s now even more important for Soldiers to stay socially and spiritually connected.

During this time of uncertainty, the general said Soldiers should remain flexible as the Army, and the entire world, adapts to a new normal.

“Please encourage and care for one another,” he said. “And seek encouragement and care for yourself, as we all work through these feelings of disruption and insecurity.”

He likened the present situation to the 1993 film, Groundhog Day, which has Bill Murray’s character reliving the same day over and over. And for many under stay-at-home orders, there seems to be a similar effect on each passing day.

Initially in the film, he said, the main character is depressed since he cannot control the situation. After realizing he can control the way he responds to it, his mood lightens up and he begins to help people.

“As we’re experiencing this together,” Solhjem said, “it’s very important to look around and take inventory of your environment and say to yourself, ‘how can I make things better, how can I improve?’”

Some good can always come out of a bad circumstance, he said, adding that Soldiers should take this time to show compassion to those who may be struggling or less fortunate.

“No matter how difficult I feel the struggle is for me, there are others who have it worse,” he said.

Even when the safety measures are lifted, the lessons learned during the pandemic may permanently change how the Chaplain Corps operates.

“It will not be going back to what is was before,” Solhjem said. “As we move forward, it’s not like throwing [on] a light switch.”

The effective communication methods being used virtually today will be a mainstay in the future, he said, likely forcing the corps to improve the quality of its services for both live and virtual gatherings.

“Having seen the Chaplain Corps’ response in this current environment, I’m confident as we move forward that same creative, innovative spirit is going to move us into our new normal,” he said.

The Army’s top chaplain said the corps is not rebuilding, but refining the skills it has previously used, such as virtual counseling sessions and other online services.

That refinement also includes a transformation plan that was ongoing before the pandemic to enhance religious support capabilities.

In it, the corps is tightening up the staff at the Pentagon while empowering a new Religious Support Operations Center at Fort Jackson, South Carolina, the main training post for corps Soldiers.

The corps is also continuing its plans to establish a field operating agency.

“We must all continue to ask ourselves how we will improve and what we will do for the Army in the future,” he said to chaplains and religious support Soldiers.

The Army’s chief of staff has also recently established a new senior leader working group for suicide prevention, in which the Chaplain Corps will play a vital role, Solhjem said.

In support of those efforts, the corps received several submissions for the new name of its own suicide prevention campaign plan. Those submissions will be cut down to about 10 and then voted on by senior leaders very soon, he said.

As they did before, chaplains and religious support Soldiers will be heavily involved in helping curb suicide, which the general said mainly stems from breakdowns in relationships.

“The Chaplain Corps leads the way in providing the means to build healthy and strong relationships and we’ll continue to do that and support our Army,” he said.

He also reminded his online audience of the National Day of Prayer this Thursday. With its roots dating back to 1775, the day is an observance for people to turn to God in prayer and meditation.

While public events are typically held on this day, Solhjem said it can still be celebrated alone.