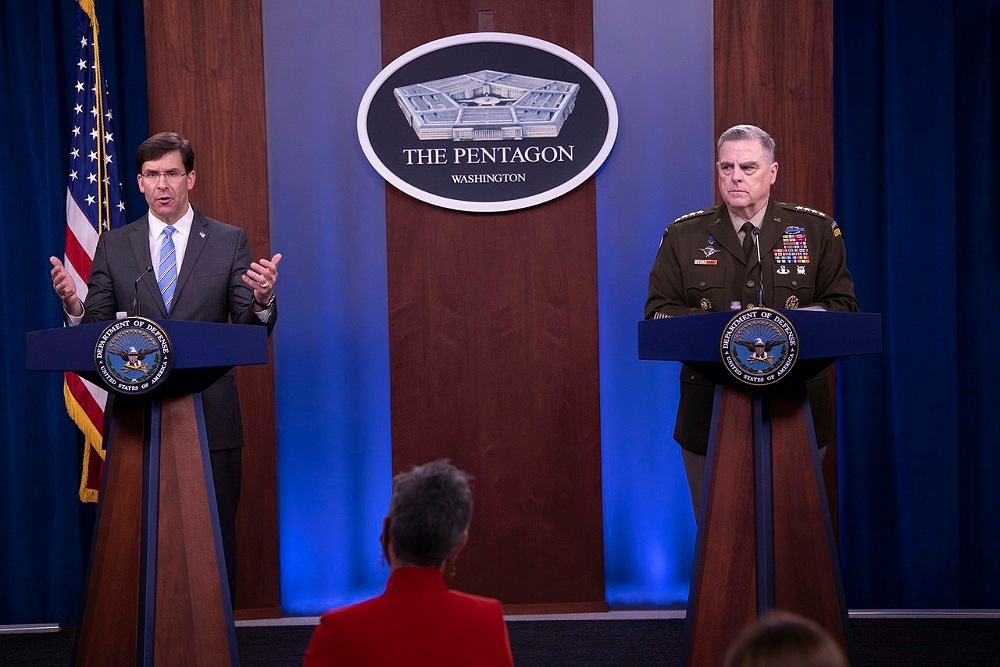 U.S. Department of Defense issued the following announcement on May 5.

DOD will continue its work with the Federal Emergency Management Agency and the governors across the country to try to stay ahead of the pandemic, the secretary said at a Pentagon news conference.

Army Gen. Mark A, Milley, the chairman of the Joint Chiefs of Staff, speaking alongside Esper, said the military has been flexible in changing its responses to the needs of the various communities.

Some 62,000 service members are supporting the fight against COVID-19, with more than 3,500 DOD health care professionals working on the front lines of some of the hardest-hit areas, Esper said, adding that he will continue to assess the situation and tailor the DOD's capabilities to what civilian agencies might need.

The secretary said he is also assessing his directives to the force.

"This week, I will conduct the first 15-day review to determine if adjustments are warranted as we work to ease the burden on the force as much as possible," he said. "We've already expanded some of the exemptions to the stop-movement order, including allowing certain permanent-change-of-station moves to proceed."

Under the changes, movers will be required to adhere to COVID-19 health protection protocols, which include wearing face coverings, cleaning surfaces and practicing social distancing. "Furthermore, DOD is requiring moving companies to provide certification to service members that their personnel have been screened for illness in line with [Centers for Disease Control and Protection] guidelines," Esper said.

DOD is increasing investments in short and long term medical solutions, the secretary told reporters. "As we work toward a vaccine and long term, we're interested in advancing immediate therapeutic solutions that can protect our service members across the globe," he said.

All this happens against the backdrop of an agency with responsibilities around the globe, Esper noted. "We remain focused on our national security missions around the world," he said. "Many countries have turned inward to recover from the pandemic, and in the meantime, our strategic competitors are attempting to exploit this crisis to their benefit at the expense of others."

He noted that the Chinese Communist Party has ramped up its information campaign to try to shift blame for its response to the coronavirus and burnish its image and has continued aggressive behavior in the South China Sea. The Chinese navy threatened a Philippine navy ship, sank a Vietnamese fishing boat and is trying to intimidate other nations from engaging in offshore oil and gas development.

The U.S. Navy replied, conducting freedom-of-navigation operations in the South China Sea "to send a clear message to Beijing that we will continue to protect freedom of navigation and commerce for all nations, large and small," Esper said.

Lack of Chinese transparency is troubling and has given rise to many theories. Reporters asked Milley if the coronavirus was man-made. Milley would not discuss intelligence matters, but he did address the Wuhan origin case of the virus. While nothing is conclusive "the weight of evidence … is that it was natural and not man-made," he said.

A question that would flow from that is whether the virus was accidentally or intentionally released. "We don't have conclusive evidence in any of that, but the weight of evidence is that it was probably not intentional," the chairman said.

He called on China to "open up and allow inspectors and investigators to go there in full transparency so that the world can know the actual original source of this so that we can apply the lessons learned to prevent outbreaks in the future."

Both men noted that tomorrow begins National Nurses Week. "We salute all nurses, both military and civilian, who have served and are currently serving our nation and our people," Esper said. "Thanks to many of their efforts, we're encouraged to see the situation improving in several of the most impacted areas of the country."