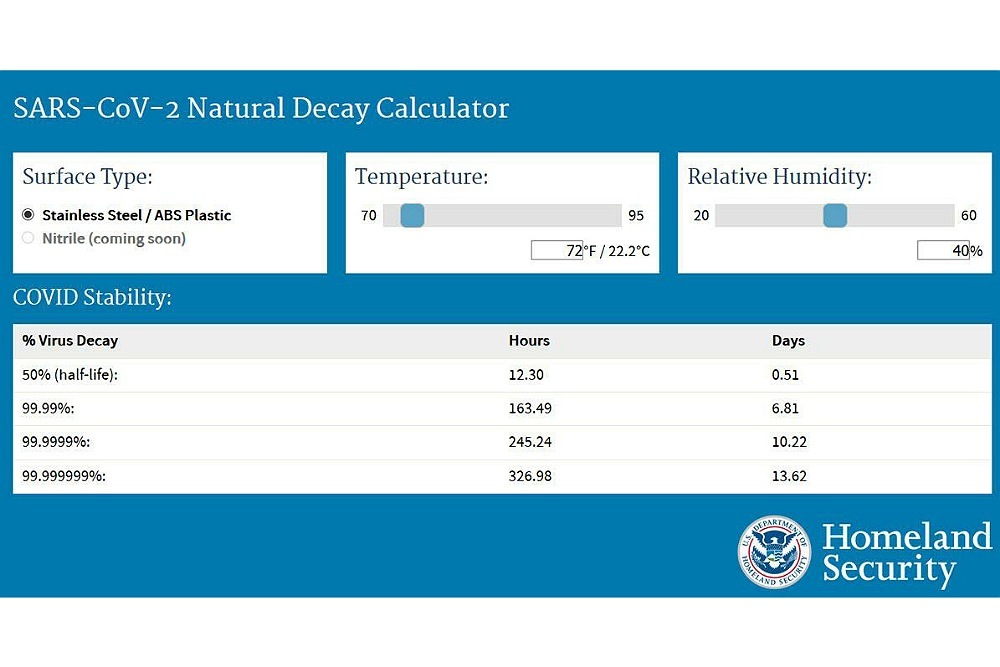 U.S. Department of Homeland Security issued the following announcement on May 13.

The Department of Homeland Security (DHS) Science and Technology Directorate (S&T) today released a predictive modeling tool to estimate natural decay of SARS-CoV-2 (the virus that causes COVID-19) under a range of temperatures and relative humidity. Leveraging the results of research being conducted at S&T’s National Biodefense Analysis and Countermeasures Center (NBACC), the tool is designed to assist response efforts and estimate the environmental persistence of the virus under certain combinations of temperatures and humidity.

“While researchers across the federal government and the medical community continue to study COVID-19, preventing the spread of the virus is a top priority,” said William N. Bryan, DHS Senior Official Performing the Duties of the Under Secretary for Science and Technology. “Transmission occurs primarily through respiratory droplets produced by talking, coughing, and sneezing. If these droplets settle on surfaces or objects, contact with those contaminated surfaces may also be a factor in spreading the virus.”

S&T’s studies show that the virus can survive in droplets of saliva on surfaces for extended periods of time, depending on temperature and relative humidity. Using this data, S&T developed a predictive model to estimate virus decay under a limited range of conditions representative of indoor environments. This initial version of the model includes room temperatures ranging from 70 to 95 degrees Fahrenheit and relative humidity ranging from 20 to 60 percent.

This model does not include the effects of conditions such as exposure to solar light.

This model will continue to be enhanced as DHS S&T produces additional data for virus stability in different environments (e.g., droplets in the air vs. on a surface, expanded temperature and humidity ranges, different surfaces).

This research is being conducted as part of S&T’s Probabilistic Analysis for National Threats Hazards and Risks (PANTHR) program.